New York City Mayor Eric Adams has announced a system-wide crackdown on homeless people sheltering in the subway, earning the ire of homeless advocates and others who believe a heavy-handed approach won’t solve the problem.

The police will enforce rules after announcing his plan to cleanse the city’s subways of the homeless people who use them as a place to sleep, panhandle, or intimidate other people.

The subway system is not meant to be housing. It’s made to be for transportation or serve as an temporary emergency shelter, and we have to return back to that basic philosophy.

The subway plan is a comprehensive civic strategy that will do more than deal with a temporary fix. You can’t put a Band-Aid on a cancerous sore, that is not how you solve the problem. You must remove the cancer and start the healing process.

The Coalition for the Homeless hit back at Adams’ plan, calling it a repeat of failed strategies. It was sickening that the mayor would deploy terms like “cancer” to refer to the homeless victims.

Those targeted for enforcement by the mayor’s new teams, include 1,000 police officers and up to 30 joint response teams aimed at steering the homeless toward help – whether it’s a homeless shelter or a hospital for the mentally ill.

Special teams will also be dispatched to end-of-the-line stations to clear the homeless out of the trains before they go back into service.

Some $27.5 million has been set aside by the state for more psychiatric hospital beds, while $12 million will go toward 500 supportive housing beds.

The announcement of stricter enforcement comes in the wake of two people being pushed in front of subway trains in separate incidents over the span of a month.

One, an Asian woman, was shoved onto the tracks in January by a man police later determined was a homeless ex-con and was killed.

The other, a 62-year-old man, survived as the train was able to stop in time; his attacker has not been named, though the attack was believed to be random. Another person was stabbed in an unprovoked attack on a train last week.

Subway crime in general has soared, with 276 cases of murder, robbery, rape, assault, burglary, and grand larceny in just the first two months of 2022 compared to 167 during the same period last year.

So NYC de-funds, fires not vaccinated people and now wants to criminalize homeless. When did the USA become like Nazi Australia/Nazi Canada. So what’s next, single bullet to homeless skulls?

Instead of banning one of the most vulnerable which are the homeless, why not ban war, or banning these racist, murderous, insurrectionist, nationalist groups and armed militias in the United States of America.

As long as a proper alternative accommodation is offered, then it should be okay. The subways are indeed no hotels. Having said that means by no way an endorsement of what politicians have been up to lately. Most of what they do have very ulterior motives to what they pretend is moving them.

That is how dictatorships operate? 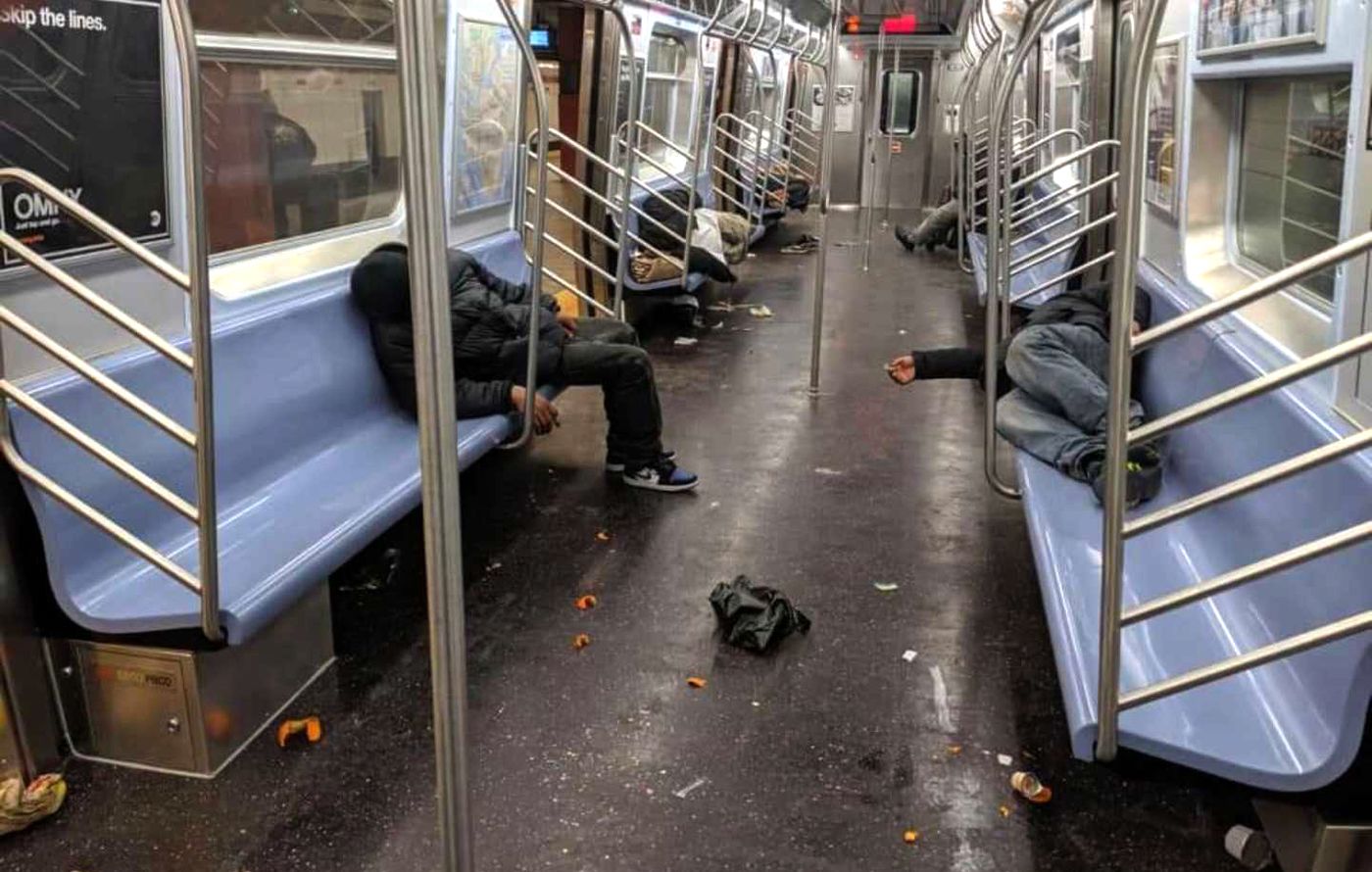 While I am sure that the public doesn’t really want the homeless to occupy the subways, at the same time, we are in the middle of the winter and it is very cold, so I think some compassion is in order here but the great reset seems to be showing us that many of our policemen are worse than vicious animals and govt orders of late are just making them worse. Or is this intentional?

If they had a better place to hide, they would not have been there at all?

The government could solve the problem – they don’t want to… The more the poorer increase, the more control the fascist controllers will have… Not rocket science folks..

Yes it’s not rocket science – it’s POLITICAL science… Not a good science to trust in, hey?

After The Great Reset (GTR), Building Back Better (BBB) will introduce global income, for the jobless survivors to live. But this free money is only available if some body doesn’t break the new rules.