Israel’s illegal settler population is driving the country’s government towards miscalculated violence, putting the entire state at risk, and last month’s 11-day conflict with Gaza may just be the beginning.

Although Israel’s ever-growing settlements in the occupied Palestinian territories (OPT) are in violation of international humanitarian law, causing great strife in the United Nations, the state continues to support expansion activities in the OPT.

The UN is not, however, the only place where Israel is suffering due to its unhinging support for its illegal settlers, many of whom carry hard-line religious fundamentalist beliefs and are also leading Israel into violent confrontations it does not know how to deal with.

The military operation was largely viewed as an astounding failure, even acknowledged as such by the Israeli media, whilst Palestinians celebrated the triumph of their armed groups upon the announcement that the ceasefire had been held.

The difference this time, when it came to Israel’s announced war on Gaza, was that it had been fought on the terms of the Palestinian armed factions.

Hamas, unlike in previous wars back in 2008-09, 2012 and 2014, fired first and dictated the course of the battle, even commanding the respect of Palestinian citizens of Israel, as well as Palestinians in the West Bank and East Jerusalem who revolted in sync with the rocket fire of Palestinian armed groups in Gaza.

The reason Israel was dragged into this conflict was in large part the fault of Israeli settler extremists who had provoked an uprising throughout historic Palestine.

The initial rocket fire from Gaza was triggered by a planned Israeli settler march which had been aimed at storming Al-Aqsa Mosque compound in the old city of Jerusalem.

Weeks of settler provocations, including the infamous “death to Arabs” marches during the Muslim holy month of Ramadan, helped to stoke tensions.

Netanyahu, in a bid to keep on side his hard-line, settler-supporting allies in the Religious Zionism Party, refused to take de-escalatory measures in order to deter the likes of Hamas from responding to the violence in Jerusalem.

At the time, the leader of the Religious Zionism Party, Bezalel Smotrich, along with far-right Otzma Yehudit front man Itamar Ben Gvir, had both appeared in Jerusalem with religious extremist settlers.

Otzma Yehudit, or the Jewish Power Party, is closely connected with extremist settler organizations, such as Lehava. Lehava’s current leader, Bentzi Gopstein, even tried to run for election to the Israeli Knesset as part of Otzma Yehudit, but was banned due to racist comments he had made.

Just days ago, some of the same members of Knesset who previously appeared provocatively in Jerusalem, did so again in a delegation supporting illegal settlers.

Despite there having been a change in the government, with the far-right Yamina Party leader, Naftali Bennett, now taking over as prime minister, very little seems to have changed on the ground.

One of the biggest provocations in the build-up to last month’s 11-day war was the court effort of an Israeli settler organization to seize the homes of Palestinians, in order to uproot them and replace them with Jewish settlers in the East Jerusalem neighborhood of Sheikh Jarrah.

The settler violence, also dealt out by Israel’s occupation forces, against Palestinian demonstrators in Sheikh Jarrah has only intensified since the formation of Israel’s new coalition government.

In addition to this, settlement activity in the Silwan neighbourhood in East Jerusalem has erupted into a second flashpoint for similar violent crackdowns against peacefully demonstrating Palestinians who face expulsion from their homes.

Israel’s political scene is now almost entirely right-wing, with only a handful of parties claiming the title of left-wing or center-left. And this is not working well for Israel’s image on the international scene.

For instance, the current Israeli ambassador to the United Kingdom, Tzipi Hotovely, believes – like PM Naftali Bennett – that the bible gives Israel the right to take over the West Bank.

Such political figures as Tzipi Hotovely, who openly espouse their racist and pro-settler views to a Western audience are an additional problem for Israel as it begins to lose legitimacy in the eyes of the global public.

Israeli settler violence is increasing in the West Bank and the government has just approved further settlement expansion.

Recent threats of settlement expansion in the village of Beita (south of Nablus), sparked violence and calls for up to 100,000 Palestinians to join in the protests.

The illegal settler outpost Evyatar is considered illegal even by Israeli law, yet despite this, Bennett is so far refusing to dismantle the settlement and defuse rising tensions which have led to the killing of seven Palestinians.

Last week, the Israeli government also allowed for a right-wing settler protest group to march into a Palestinian-majority area in Jerusalem again. Illegal settlers chanted “Death to Arabs” and made several other racist remarks.

The settlers came close to provoking another large-scale Palestinian response, which the Israeli government demonstrated it would rather confront than upset their settlers.

The Israeli government’s support for settlement expansion may have seemed like a good idea as a strategy that could work to usurp Palestinian land.

However, the problem that is now arising seems to be that Israel is becoming overrun by the settlers and being forced into irrational and dangerous moves as a result.

The leader of Lebanese Hezbollah, Sayyed Hassan Nasrallah, has pledged that attacks on Al-Aqsa should lead to a regional war against Israel – not a threat to be taken lightly. Yet, Israeli settler groups continue to come dangerously close to replicating last month’s events.

Settlers used to be under the complete control of the government, but if Israel does not check itself, soon those settlers – many of whom carry extremist views – may end up seizing more control over them and forcing Israel into a war that it cannot handle.

700,000 Israeli settlers, on top of 9,327,000 illegal occupiers is quite a Hefty number of fugitives, surely Poland, Kiev, Lithuania and Hungary can lower the figures and Extradite their citizens back home”

Back to their roots?

Israel is a settler colony, just like Canada, Australia, New Zealand and USA, etc… They all invaded, killed the indigenous people and stole their land and resources. Israel and its Zionist supporters want it to expand with aggression against its neighbors so that they can steal more land and resources. Entire NATO, its banking system and its mass media support the Greater Israel project. However, the decent and ordinary people around the world, in the millions, perhaps billions, see the injustice and suffering inflicted on the helpless Palestinians, with NATO and corrupt Arab regimes help and complicity! The current entire… Read more » 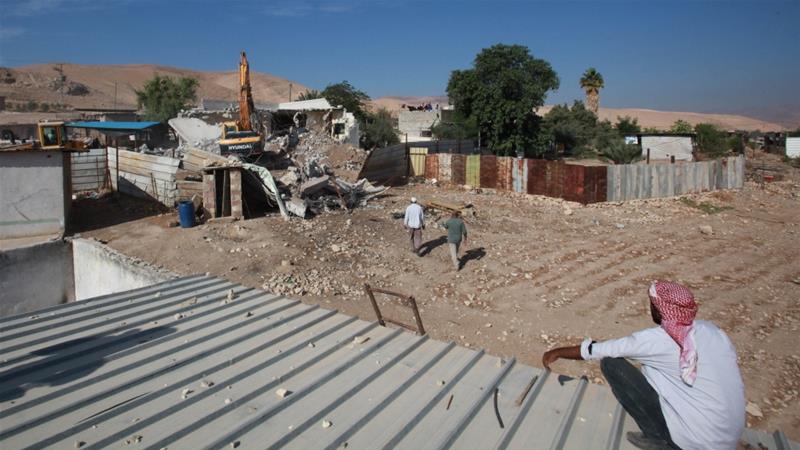 Smashing down Palestinians homes in order to replace them with Settler entities?

Really disgusting attitude, but this happens all over the world where Zionist are running the horror show?

The problem is worse: 25% of US citizens think the Al Aqsa mosque should be destroyed, to hasten the second coming of Christ … Imagine the world war that would follow. Religious people without soul are very dangerous.
9/11, covid, … don’t tell me they show any restraint, don’t tell me they are not in government.

Does anybody remember Poltergeist 2. Creepy uh ? Well, reality is that such creeps are an enormous proportion of humanity. Most of our evil comes from the bible – the manual of satanism. This is the real horror story.