Home Economy Europe bankrupted itself and gutted own Security to funnel Kiev with Weapons?

Ukraine’s European benefactors made a big show of rushing military aid to Kiev in the early months of Russia’s special military operation, but the torrent has waned to a trickle since then, with no new pledges being made in July, 2022.

One military expert said Europe is running out of both equipment and willpower to support the horribly corrupt regime. The more Europe invests its military capacity into Ukraine, the weaker Europe gets.

Scott Ritter, a military analyst and former US Marine Corps intelligence officer, said that NATO’s policy of giving Ukraine billions of dollars in weapons that so quickly get destroyed is inefficient and counterproductive from both a political and a national security point of view.

I think there’s a couple of things at play here. One, and I think first and foremost, is that Europe has bankrupted its own military capacity by transferring military equipment to Ukraine in an unconstrained manner.

It’s becoming clear to all that Ukraine is facing a very difficult time on the battlefield. Weaponry is being provided by Europe, by the USA, by NATO, and this weaponry is not being absorbed in a coherent manner by the Ukrainian Armed Forces.

Instead, it’s being received and rushed to the front where it is not being used effectively and increasingly it’s being destroyed by the Russians. This is very expensive, very inefficient.

It’s detrimental not only to Ukraine’s military capability but also the nations providing the equipment. They’re literally stripping bare their own inventories to support Ukraine in a losing cause.

Ritter noted how Ukrainian President Volodymyr Zelensky is no longer seen as the savior by Westerners. More and more, he’s being seen as what he has always been, an incompetent politician operating way above his capabilities.

In particular, he recalled how a damning CBS documentary about the conflict was partially retracted earlier this month after it revealed that some 70% of equipment given to Ukraine never reaches the battlefield, either because the Russians destroy them or because they’re sold off on the black market.

Forthcoming trials in Mariupol can also be expected to further peel back the Western myths about the Azov Regiment and other neo-Nazi units being anything but fascists.

It’s a horribly corrupt regime. It’s also a regime that is being linked to an odious ideology, the old ideology of Stepan Bandera – a neo-Nazi, right wing, ultra-nationalistic ideology responsible for the murders of hundreds of thousands of people in the years of World War II and the decade afterwards, people who terrorized, murdered, raped ethnic Russians in the aftermath of the Maidan coup that took place in 2014. 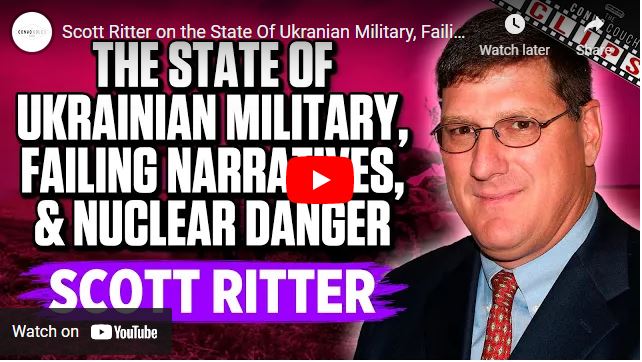 Ritter said Germany and France, the two powerhouse NATO nations in continental Europe, are “paying a horrific economic price” and political price for their efforts to bring the US back firmly into the NATO fold, following four years of vacillation by former US President Donald Trump.

Vaccination in USA can not longer be required for Travel Industry