Home Nature A major US snowstorm to roar across the Midwest, South and East...

A potent winter storm is forecast to wallop tens of millions of people across the central, southern and eastern USA with snow, ice, wind and rain over the next few days.

The Weather Channel, which named the sprawling storm Izzy, said it is likely to produce “major travel headaches” from North Dakota down to northern Georgia and up to Maine.

The first area to see snow Friday will be the upper Midwest, where winter storm warnings, watches and weather advisories were issued by the National Weather Service.

A wide swath of 6 to 12 inches of snowfall is expected to encompass the eastern Dakotas to western Minnesota and Iowa.

There will be a band of heavy snow that generally extends from the eastern Dakotas and Minnesota southward to at least much of Missouri and maybe the Ozarks in Arkansas. Minneapolis, Des Moines, St. Louis and Kansas City are all in the path of the storm.

On Friday and into Saturday, difficult driving conditions are likely throughout this region as roads become snow covered. From there, the storm should bring a blast of wintry weather to the South, including accumulating snowfall and the potential for a dangerous ice storm.

Parts of North and South Carolina, as well as portions of Virginia where amounts could easily exceed half an inch of ice could face the biggest threat from icy precipitation.

The storm’s last stops will be the mid-Atlantic and Northeast after it takes a sharp turn to the north-northeast along the Eastern Seaboard on Sunday and into Monday. 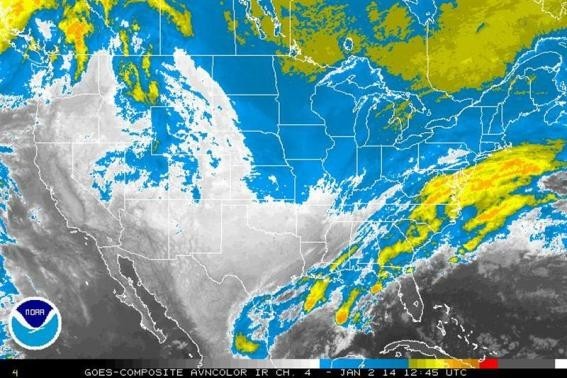 Tens of thousands of customers were without power in Georgia, North Carolina, South Carolina and Florida. More than an inch of snow fell per hour in some parts of the Carolinas, Georgia, Tennessee and Virginia, according to the National Weather Service Storm Prediction Center.

USA jacks up Import Taxes on $550 Billion of Chinese Goods